A Closer Look with Phil McLendon 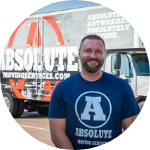 Phil McLendon is the owner and founder of Absolute Moving Services, LLC, located just outside of Memphis, Tennessee. Founded in 2012, Absolute Moving has become one of the fastest-growing small moving businesses in the Mid South. His company has helped dozens of women and children escape from violent households. His company also collects furniture and household goods that are donated from clients and delivers them when needed to these families who are starting over. This has become a mission for Absolute Moving Services, which Phil termed #ShatterTheSilence. With over 16,000 fans and followers on his social media pages, Phil has used his platform to bring about awareness to domestic violence. He shares messages of hope, survivor stories, and some of the personal experiences his company has had with these survivors, who have become an inspiration and beacon of strength and resilience for Phil and his employees. All of Phil's moving trucks and company uniforms have a purple ribbon and custom #ShatterTheSilence logo on them, so that everywhere they go, locally and nationally, people will know what they stand for, as they bring about awareness to this issue and promote change. Phil's goal is to continue growing this mission and to establish a vast network of moving companies across the U.S. who are dedicated to helping those living in a violent household and looking for a way out. Phil's motto is "no survivor left behind" and he is committed to making himself and his resources available at no cost to anyone affected by domestic violence - no matter the time, the place, or the circumstance.

I believe Marsy's Law will help current victims and survivors of crime by giving them a voice. These victims and survivors have been robbed of their voice and their rights by their offender. They have endured pain, trauma, and hurt, unlike anything most of us could imagine. The incarceration process for their offender should be the beginning of hope and healing for them and should be a transparent process that allows them a chance to reclaim their voice, not a process that further drowns out their voice and shuts them out. This is a simple solution for a very intricate and multi-faceted problem; and it can help empower these victims and survivors as they yearn for peace and healing.

In discussing criminal justice with victims and survivors, a common frustration I have heard is that they are often blind-sided by the release of the abuser/offender. They are retraumatized when they have to learn through social media or from a mutual contact that the abuser has been released. The healing process crumbles and they are forced back into fear and panic as they are now having to look over their shoulder constantly. They feel forgotten about and further humiliated by the system, as the offender is given more attention and focus than them. They aren't able to arrange appropriate plans for safety in a timely fashion because of the lack of communication from the justice and legal system. They are forced to fend for themselves and live in fear that at any moment, the offender can hunt them down and make them pay for the incarceration.

Which component of Marsy’s Law for Tennessee stands out most to you and why?

The component of Marsy's Law that stands out most to me is the fact that this law would provide every victim and survivor to not just be seen and heard, but respected and validated. As someone who works closely with survivors of domestic violence, I have seen the traumatic effect it has on them. They feel silenced, lost, broken, disrespected, and their dignity and feelings tossed out like trash. Marsy's Law would be a catalyst for them to regain their voice, their self-esteem, confidence, and dignity. It would show them that they do, in fact, matter; and that their safety, their rights, and their voice are not just an option but a priority.

Why are constitutional rights necessary as opposed to current statutes dedicated to crime victims’ rights?

Constitutional rights are necessary as opposed to current statutes because it ensures that victims/survivors have the right to be heard. The accused and convicted should not have any more rights than the victims of a crime. It's really a no-brainer. So much focus and attention have been given to the accused and the convicted that the victims seem to have been forgotten about. It is time that these victims are treated fairly, and that their rights are backed by the constitution. This way, and only this way, we can move forward as a nation, in the right direction, and never look back to the days where victims' rights were overlooked.