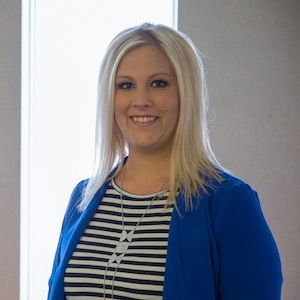 Sara Krekelberg joined The Compass Center in June 2014 as a victim advocate. In 2020, she moved into the role of advocacy coordinator. She received her Bachelor's Degree in Human Development and Family Studies with a minor in sociology in 2012. Her past experience includes working with at-risk children and families. Sara enjoys being involved in many volunteer organizations and is committed to helping those in need through victim advocacy.

As someone who works with survivors, how do you believe Marsy’s Law helps current victims and survivors of crime?

I think Marsy’s Law gives survivors a voice, a safe place to share their stories and express themselves.

In general, I think survivors have been frustrated by our criminal justice system. What I mean is cases can get dragged out for months and months per the offender defense team for various different reasons. Many survivors get frustrated at the lack of follow-through by the offender and the lack of discipline when they don’t follow through. Within my years working with survivors I often hear they feel their offender “just got a slap on the hand” for their offense and are able to plead down to a charge that isn’t comparable to the original charge/offense.

Which component of Marsy’s Law for South Dakota stands out most to you and why?

“The right to be heard in any proceeding involving release, plea, sentencing, adjudication, disposition or parole, and any proceeding during which a right of the victim is implicated." This is so important and many survivors want to actively partake in. This right gives the survivors a voice, time to share their thoughts and concerns with the courts.

As you've worked to spread awareness about Marsy's Law in South Dakota, what has been the response from those you work with and in your community?

Overall I think the response has been positive. As an advocate myself, Marsy’s Law plays such a huge role for my clients and survivors to be able to express themselves but also feel respected in such a chaotic and stressful time.