ATLANTA – October 13, 2022 – In honor of October’s observance of Domestic Violence Awareness Month, Marsy’s Law for Georgia presented its Champion Award to lifelong victims’ rights advocate Derek Marchman on Wednesday, October 12, for his 30-plus years of working to advance and support crime victims’ rights in Georgia and the nation.

Marchman was recognized for his critical role in helping to pass Georgia’s Victim Bill of Rights and Family Violence Act with the Georgia Governor’s Criminal Justice Coordinating Council, and his work to enact institutional changes as the director of the Georgia Victims’ Compensation Program. Marchman also headed the assistance efforts for the 1996 Olympic bombing victims to ensure victims had their medical bills, family privacy issues, and trauma addressed. His work with legislators in adding a percentage of fines and parole fees paid into the Crime Victims Fund has resulted in more than $20 million awarded to over 4,800 victims or their families annually. 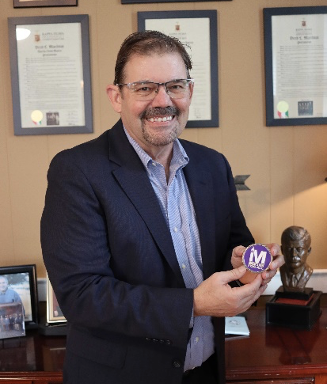 “After U.S. Attorney General Merrick Garland presented Derek Marchman with the Crime Victims’ Rights Award in April for his prolific work on behalf of victims and their families, it was only natural that we not only recruit Derek as a Marsy’s Law for Georgia Advisory Board Member but also honor him with the Marsy’s Law Champion Award,” said Marsy’s Law for Georgia consultant Brad Alexander. “Recognizing Derek during Domestic Violence Awareness Month also provides a signal boost for domestic violence victims and survivors to ensure their rights are being observed and their needs met.”

At his consulting firm, Marchman continues his support by creating programs and policies for crime victims and then helping those in government and judicial positions to execute them. He also finds the time to train and lecture as a motivational speaker at law enforcement conferences, collegiate athletic programs, Greek organizations, and more on the topics of dating violence, cultural diversity, and psychology, which have motivated and inspired officials, students, and leaders around the country. Watch his tribute video from the OVC here.

“It’s been an incredible year receiving the Crime Victims’ Rights Award from the OVC and now the Marsy’s Law Champion Award,” said Marchman. “My life’s work has been focused on victim assistance and providing government entities with the tools to better serve victims. I look forward to continuing my efforts as a Marsy’s Law for Georgia Advisory Board Member to do all that I possibly can.”